GAME JOURNALIST & SCREENWRITER
Overview:
Bio Inc. Redemption is a resource-management strategy game that has the player either saving or killing patients with various diseases. As you play though the single-player, different challenges and objectives grow more diverse and difficult, while the online mode offers a way to compete against your friends or strangers to either save a patient's life, or cause their unruly demise.

Gameplay:
Bio Inc. Redemption offers two distinct but similar ways of playing: life or death. In life, you are tasked with finding each disease that plagues a patient, and curing them of their ailments before they die. In death, the player is tasked with killing their patients by evolving diseases until their body is overwhelmed. During these campaigns, a patient’s vital signs are displayed in overall health, and other vital signs are broken up into the circulatory, respiratory, digestive, skeletal, nervous, renal, immune, and muscular system. All of the patient’s systems affect the overall health of a patient, and if one system fails, the rest of the systems begin to deteriorate. Harvesting resources is as easy as holding down the left mouse button until the resource is harvested, but the higher tiered resources disappear quickly, and these resources spawn randomly across all of the body’s systems. 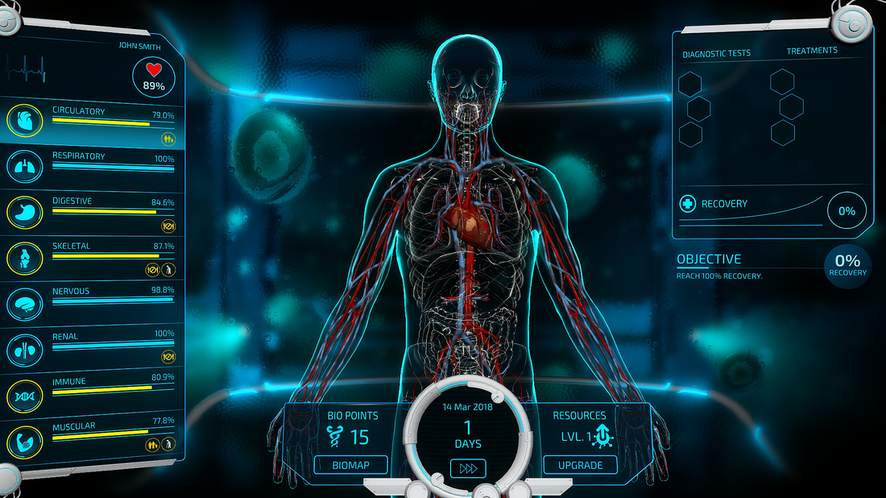 ​
During these campaigns, a patient’s vital signs are displayed in overall health, and other vital signs are broken up into the circulatory, respiratory, digestive, skeletal, nervous, renal, immune, and muscular system. All of the patient’s systems affect the overall health of a patient, and if one system fails, the rest of the systems begin to deteriorate. Once a patient’s symptoms and vitals reach a low enough point, they will visit a doctor routinely, and once a patient has a system in danger of failing, they will be rushed to the ER, and the efforts made to save the patient will increase, and it will make killing the patient more difficult.

While playing life, certain systems of a patient will deteriorate, so you must diagnose each disease that is affecting the body in order to treat it. You get general hints of what might be causing illnesses through symptom severity. Collected resources are used to perform tests to see if a patient has positive or negative reads for certain diseases. If tests come back positive for disease(s), then resources can be spent to treat those ailments, and both diagnosing and treating diseases take time. Once you cure your patient, you win, or you win when you have completed that level’s objective. You lose once your patient has reached 0% overall health.

​On the flip side, playing death has you creating diseases, promoting unhealthy lifestyles, and cause medical hardships for a patient. Once you instill disease into a patient, you can cause greater harm by essentially upgrading these diseases from disease trees. Certain diseases and detriments can only be unlocked when you have met one or multiple prerequisites, such as having obesity or having certain diseases. You win when you kill your patient or complete the level’s objective, and you lose if your patient has been cured. 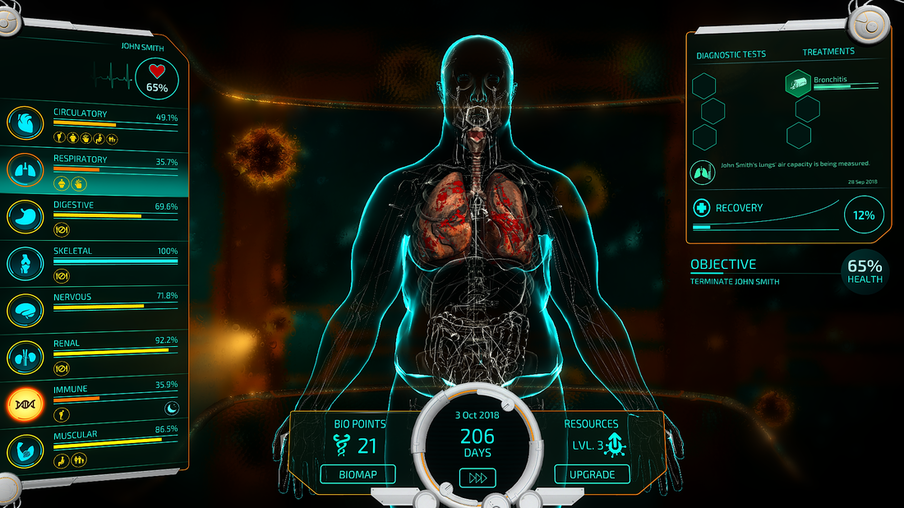 Each play style offers, as mentioned before, lifestyle changes, and resource investments that can help in the long run. For life, you can invest resources to slow down the deterioration of certain systems in a patient to give more time to cure them. You can also restore a system’s health up to a certain point with surgeries with some of the For death, you can invest in bad habits to boost the effectiveness of diseases in certain systems, increase the chance of developing random diseases, reducing the effectiveness of treatments, and more.

While the gameplay is simple, it tries to make up for it with its complex system of play. With thousands of possibilities and strategies, the replayability can be quite strong. Games are long, however, and this can either be a blessing or a curse to some. In addition, as you play and complete levels, you gain experience based on a few factors, and that experience goes to leveling up your player’s account. As you gain levels, you can select perks to help you in either campaign, and more player levels unlock more perk slots. 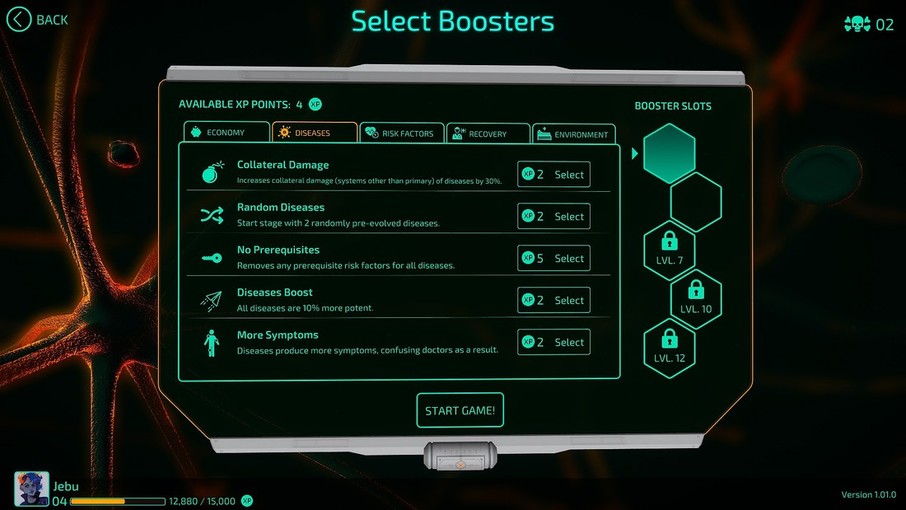 One of the biggest and obvious disparities between life and death gameplay is how straightforward the gameplay is. Death is a bit more obvious, and the gameplay seems more intuitive and requires less of a complex understanding in order to have fun and play effectively. Life, on the other hand, seems to be more of an educated guessing game. Although it isn’t the worst thing in the world, and it has its own strategy for playing, death felt much more rewarding and easier to grasp. In addition, the harder levels feel like they almost require perks. While it makes sense to have trouble beating hard level immediately, it felt more like the difficulty was designed to be combated only if you have certain perks rather than be a test of skill and strategy.

Game Design:
The game’s graphics are standard at best. They get the job done, but the awesome part is how each bodily system is designed. When you select a system, the internal workings of that system are displayed, and as a patient’s health deteriorates, afflicted systems begin to deteriorate as well. It was a neat touch that added to the experience.

That being said, the game’s animations get in the way of gameplay. Because resources spawn on a patient’s model, any time the model moves, the resources move with the model itself. It makes it difficult to collect resources during animations and makes harder levels artificially difficult. There are also blood animations that are distracting, but there is an option to turn these off. In addition, the game allows you to dress up patients as different characters, such as political figures, holiday mascots, and even gaming personalities, but these also end up being distracting and can hide resources accidentally. It is also recommended to avoid costumes unless for novel or comedic reasons.

The UI in Bio Inc. Redemption is straightforward and works quite well. The information can be a little overwhelming at times, but everything you need is unobstructed, and it will always be available for you at the a press of a button. You can also set custom keybindings to quickly swap between most sections for a better experience. 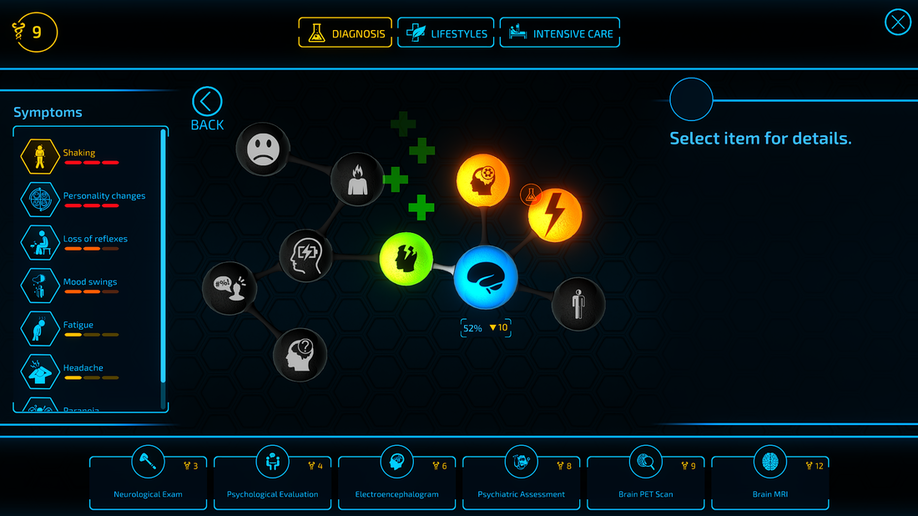 The music provided in this game is alright. The menu music is good, and the themes that play during life and death gameplay are alright. There is a frantic track that plays while a patient is in the ER, but it can be a bit grating, especially when a heart monitor is constantly beeping. The music does not loop perfectly, but it is a bit more forgivable in this case because there is not a huge gap between replays.

The game had a couple technical issues, and I had the game crash twice on me during multiplayer. Oddly enough, it never crashed during solo play, but it made playing multiplayer a bit of a drag when it crashed. There was also a glitch in single-player that did not allow me to see the symptoms of a patient. Other than these two problems, no other technical issues seem to be present.

Online:
Bio Inc. Redemption has a multiplayer aspect to it, and it consists of a ranked mode and a casual mode that you can use to play with your friends. Rankings are divided into overall rank, life rank, and death rank. While playing online, you can choose between the life, death, or a random side, and the matchmaking will pair you with the opposite choice. In multiplayer, you compete against your opponent to save or kill the same patient. It operates the same way as the single-player mode, except there are no perks, and you are playing against another person in real time. 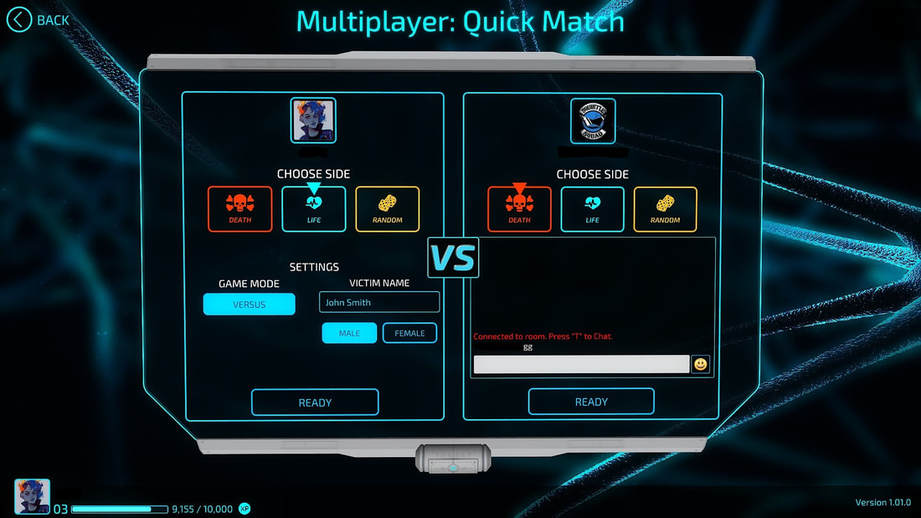 Once you are matched, death players will have a minute to spend pre-allocated resources to give the patient pre-existing conditions, and those playing life will be able to see the symptoms of their patient before the game begins. Once the game begins, the game operates mostly the same as in single player. At the top of the screen, there are portraits of whoever you are playing against, and there is a bar that monitors who is currently winning. As one side gains momentum over the other, the bar will adjust accordingly.

The main issue with multiplayer comes from the fact that resources stop spawning when you open up a menu of any sort. In a game where collecting resources quickly matters, it really impedes the pacing of the game when you force resource spawns to stop and then have to wait around aimlessly until more spawn.

Another issue would be the match waiting times. It took around 3 - 5 minutes each time to find a game, and that is largely due to the small player base. It is easier to find a game when you select random, however. That being said, after a game is done, you can rematch your opponent in the same lobby, so you do not have to re-queue again as long as your opponent wants to keep playing. You can also change to either life or death while in the lobby as well. While the multiplayer is fun, it should not be the main draw of the game due to the slow queue times. 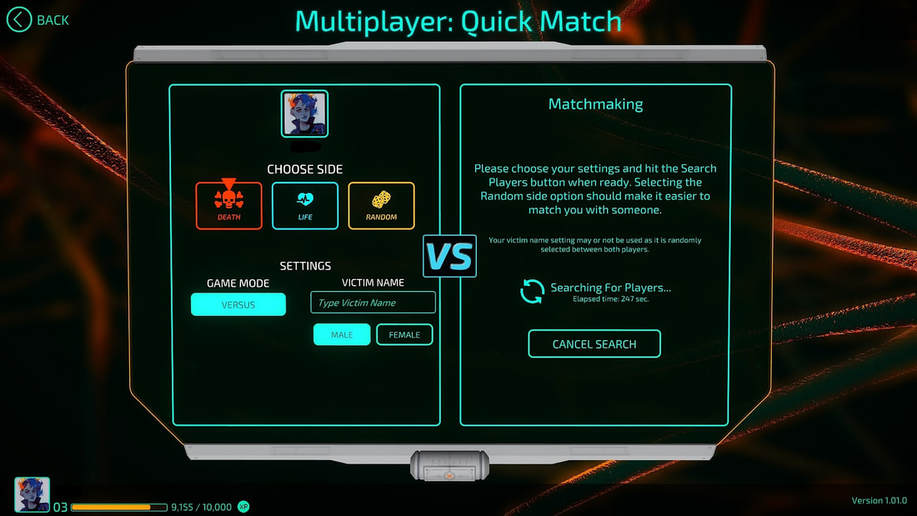 There is also an option to change what multiplayer mode to play as while in the lobby. Since there is only versus mode, this would imply that more multiplayer modes will be released eventually.
​
Verdict:
Bio Inc. Redemption offers a deep, complex strategy game that offers challenges and mostly rewarding gameplay. Although the death campaign is more straightforward and exciting, both life and death offer a methodical way of play. The multiplayer is a bit lacking due to a small player base, but playing against friends seems like it would be a blast. However, the crashes and detrimental animations will deter some from buying. With a $13 price tag, however, and the amount of value you could get from the game, it would be a worthy investment.