GAME JOURNALIST & SCREENWRITER
Overview:
Bombslinger is a Bomberman-esque, action-maze rougelike indie game developed by Mode4. Bombslinger is about Bombslinger McMean, the ex-criminal with a quest for revenge. During his journey, he will bomb, shoot, collect items, and roll his way to fight his old posse until every last one pays for the death of his wife.
​​
Gameplay:
Bombslinger is a unique game, for it borrows from rougelikes such as The Binding of Isaac, and the game that defined the bomb-maze genre, Bomberman. This mix of genres has never been done before, and it is a fresh take on both types of games.
At its core, Bombslinger is a rougelike, so if you die, you have to restart the entire game over again, unless you have a revival item. As you go through the game, you will fight enemies in procedurally generated maps and rooms. You are locked into a room until you kill all enemies within it, and there is also a boss room on each level that must be beaten to progress forward. It is a bit awkward at first to balance the maze-bomber gameplay with rougelike elements, but as you play, you easily get used to it.

Before you begin playing in Adventure Mode, you have the option of selecting items that give you various benefits in game. These items can greatly influence the style of play you might want to lean towards as you play. As you beat bosses, fulfil specific requirements, or upgrade your stats, you will unlock more items to choose from before you begin the game. There are a total of 32 items to choose from, and a max of 5 items that you equip before the start of a game. 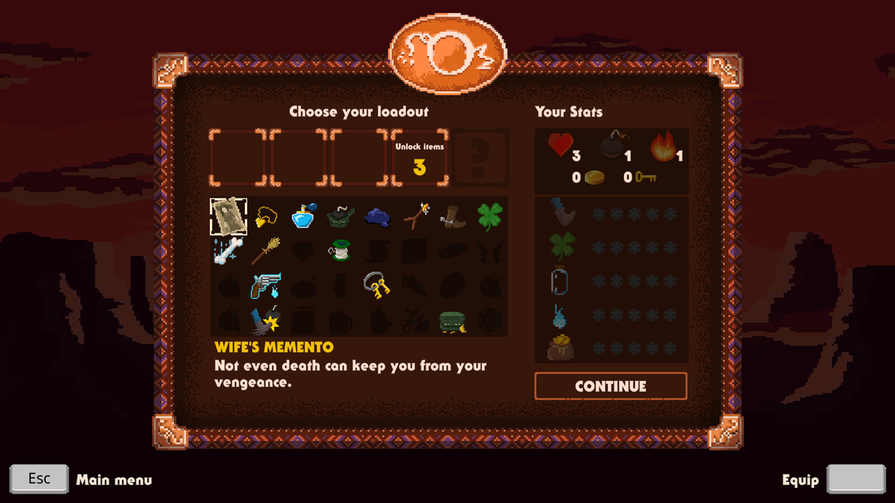 Bombslinger is specifically designed so that it cannot easily be beaten on the first try, but with each attempt, it becomes a little bit easier. Although frustrating at first, there is a huge feeling of progression felt from both learning the mechanics and unlocking more items to use. Even though you might die in the first level, you will get a better understanding of specific enemies, how to use certain items, which power ups do what, bomb timing, and so on. As you get better, you will unlock more items that will make each run just a little more easier. It also gives the game massive replayability. With so many items and combinations, there are plenty of ways to try and tackle the game.

When you kill enemies, you gain XP, and once you gain enough, you will level up. For each time you level up, you are given the option of three different upgrades to choose from, which can give more HP, Spirit (which determines how much you can use items), Spirit Regeneration, Luck, Movement Speed, Bomb Placements, or Bomb Flame. Additionally, there is an option to cash in your level up to refill your resources. To increase the risk-reward for getting XP, chaining together kills in a short period of time grants bonus XP, so it gives a nice incentive to get creative or dangerous with your kills. It also feels awesome to get a huge chain going and clear an entire room with spectacular fashion. 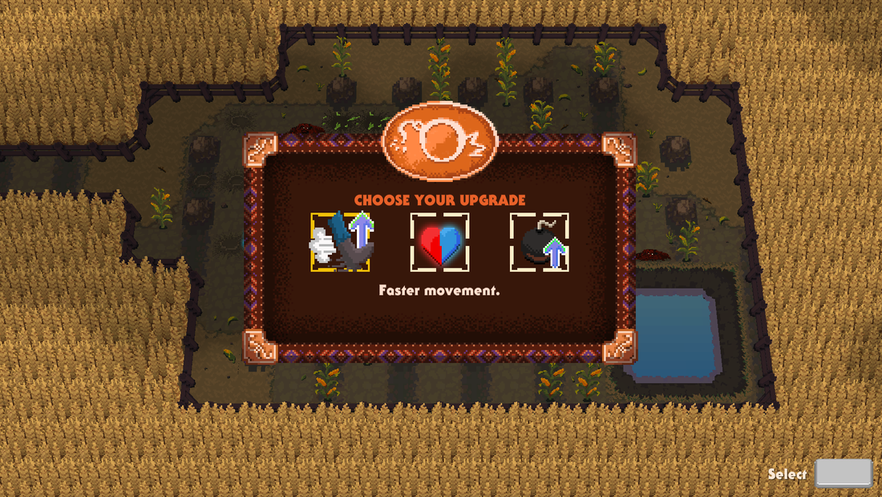 There are also items that you can find, buy, or unlock that have varying effects. Snake Oils and consumables are one use only, abilities help mix up your playstyle permanently, and other items use up your Spirit meter to perform certain, sometimes powerful actions. Some of these powerful items, however, can actually make some parts of the game drastically easier. This has been somewhat balanced with having those items consume more of the Spirit meter, but it is a noticeable difference when a single item can potentially carry you through the entire game. When you get enough upgrades to have those items be absolute monsters, though, there is a good chance that you would be able to plow through enemies regardless, but it is still worth noting.
​
Bombslinger also comes with an additional Battle Mode where you can locally play with up to four people in classic Bomberman fashion. There are only two modes at the moment: Deathmatch and Last Man Standing. Deathmatch has players trying to rack up the most kills, and Last Man Standing has players trying to be the last alive. Both modes have options for game customization, and there are a few maps to choose from as well. Although a great concept, the lack of online multiplayer is a huge miss. Also, due to the lack of a shrinking stage or sudden death, the AI or players are not encouraged to play aggressively, making games drag out longer than they should. 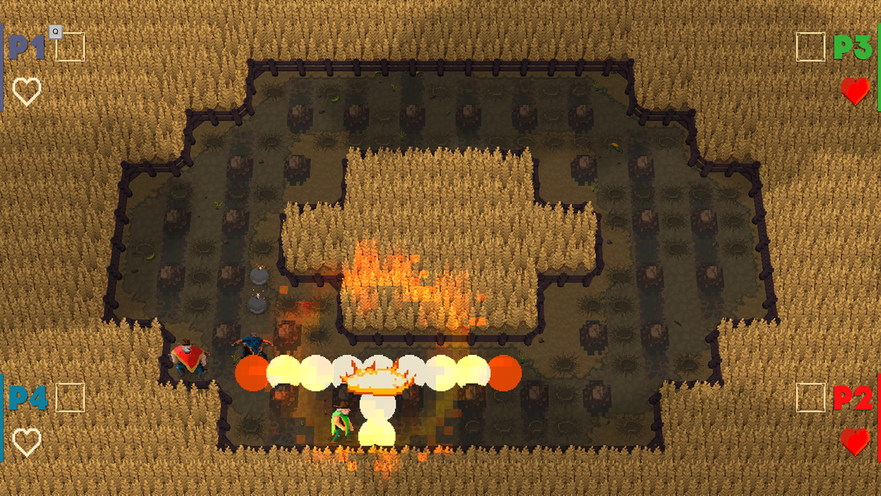 Game Design:
Although the graphics in Bombslinger are pixel graphics, the fluid animations, 3D rendering, and character design do a fantastic job of making details stand out. From the plains, to the desert, to the mountains, to even the general store you can access, there are tons of varied, vibrant landscapes to look at, interesting enemies, and a load of charm and design put into the game. The best part about playing Bombslinger was encountering all of the different characters in the game and seeing how different most of them interacted from each other.

​The environment designed for each level are quite good, but the procedurally generated rooms can sometimes have weird spawns for obstacles and enemies. Thankfully, whenever you walk into a room, the entrance is set up in such a way where it is nearly impossible to get cheaply hit upon entering a room blindly. That being said, whenever you move to another room, the pixelated transition feels a bit jarring, and a more fluid transition would have been preferable. Also, sometimes the pathing will act wonky, and it will cause bullets to hit walls instead of going straight, or turning in one direction will take you in another.

The menus are well designed, and upon pausing the game, all of the player’s current stats can be seen in a neat and orderly fashion. The only real complaint is the lack of a quickmap key. In order to view the main map instead of the minimap, you have to pause the game, and then go to a seperate map button. It can be a little annoying, but past that, it really is not a big deal.The music in Bombslinger is also well scored. Each level has a different, unique track that is memorable in its own right, and every track was decent at the worst. The sound effects are also well done even though a few sound effects were annoying, but it was not to the point of being grating. 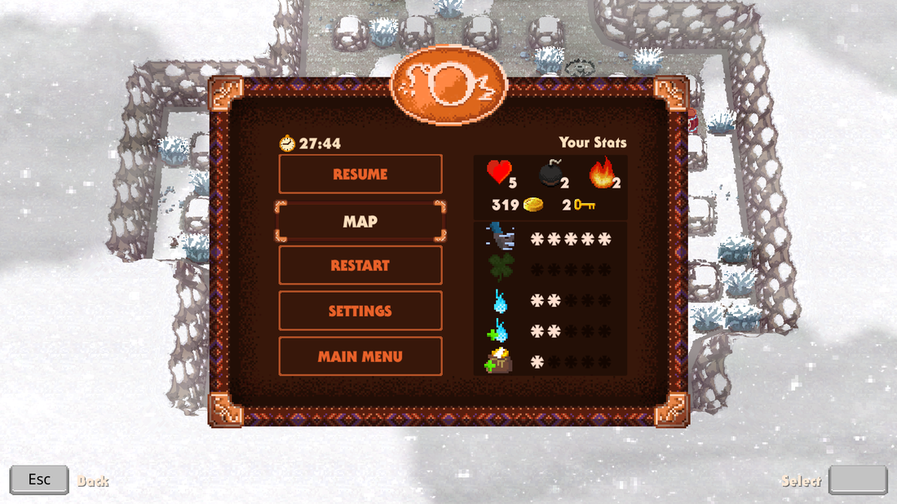 Although Bombslinger states that it has controller support on the PC version, it is currently not functional. After trying multiple times to try and get it working, it would not budge. After testing the controller with other games, it does appear that this fault is on the side of the game. It is a real shame because this kind of game would feel a bit better with controllers. In addition, without the use of controllers, it is hard to play Battle Mode with more people, and this is a major letdown.

Story:
Bombslinger McMean was part of a rag-tag team of bandits, but then he met his wife. His old gang, which even includes his brother, decide to burn down McMean ranch and kill Bombslinger’s wife. With nothing left to lose, the only thing left to accomplish in his life is to seek revenge on those who ruined everything for him. While the story of revenge is an old cliche out of a Spgaghetti Western script, the quest for revenge actually helps the game’s bosses make sense contextually. It makes sense why you are traveling from level to level to fight these bosses, and this type of story is perfect for giving reason for each level.​​ 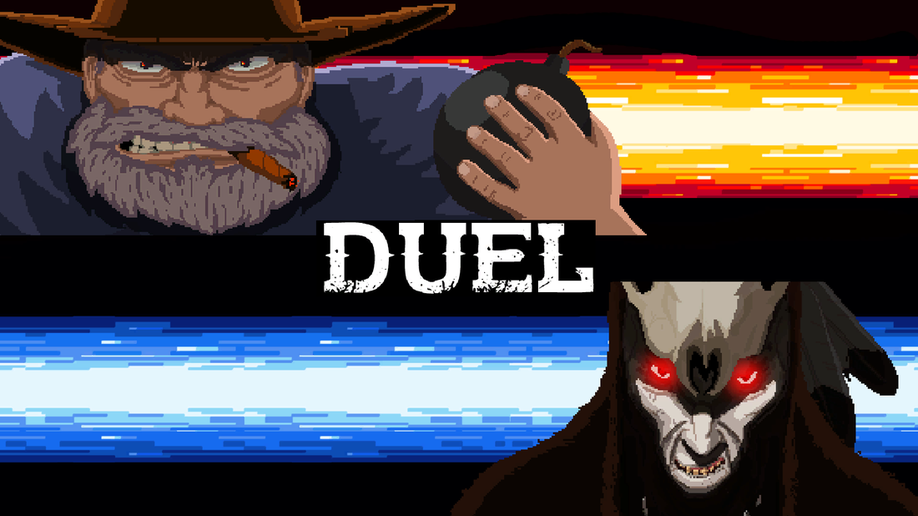 Before a boss battle, you are treated to a bit of dialogue from the character you are about to fight, and it gives a bit more background to the entire thing. It still is not anything special, but there was an effort that was made. Also, each boss battle is not with a member of your ex-posee 100% of the time, however. This would make sense after you beat the game at least once for new content, but it can happen before you beat the game, so it can ruin the feel of the story a bit.
The ending also gives you a slight moral choice, but because the story does not build on anything really, it really just comes down to one of two button presses rather than an actual moral choice. As a result, the story does little to separate itself from most Wild West types of media.

Verdict:
Bombslinger is a unique action-maze rougelike with tons of challenge, charm, and replayability. Its technical shortcomings are a huge negative, and as a result, bring the game down. While the story is subpar, the actual gameplay, graphics, soundtrack, and everything else is the absolute bomb.