GAME JOURNALIST & SCREENWRITER
Overview:
Creed: Rise to Glory is an action VR game from Survios that puts players in the gloves of boxing prodigy, Adonis Creed, where players will train alongside titular characters, fight fearsome opponents from all around the world, and push their bodies to the limit.

Gameplay:
At its core, Creed: Rise to Glory is a boxing game that aims to bring a cinematic experience from the Rocky universe to the player. In the game, there are multiple modes to choose from, ranging from a pure training mode up to a story mode with varying degrees of difficulty. While you can jump straight into a fight, it is recommended to try out the story mode first, for it will help players get accustomed to the controls of the game.

In story mode, players will be given the chance to learn the controls in a comprehensive tutorial. Learning to throw punches, combinations, blocking, and accuracy are all taught, and they also prepare you for an important part of any fight, both in and out of the game: the training. Before any fight in story mode, players will have to go through a “training montage” which will test individual fundamentals in rapid succession, which include combination practice, punching and dodging practice, throwing flurries of punches, endurance, and more. Also, it will also prepare you for specific attacks that the opponent might throw at the player.

These training montages, while being important for the sake of literally warming up for a fight, also help improve Adonis Creed’s ability to fight his opponent. Depending on how far players get into the training montage, they will be graded on a scale of 1 to 3 stars. 1 star will marginally help in the ring, and while getting 3 stars is not a necessity, it will still have a noticeable difference depending on who you fight and what the difficulty the game is set to. 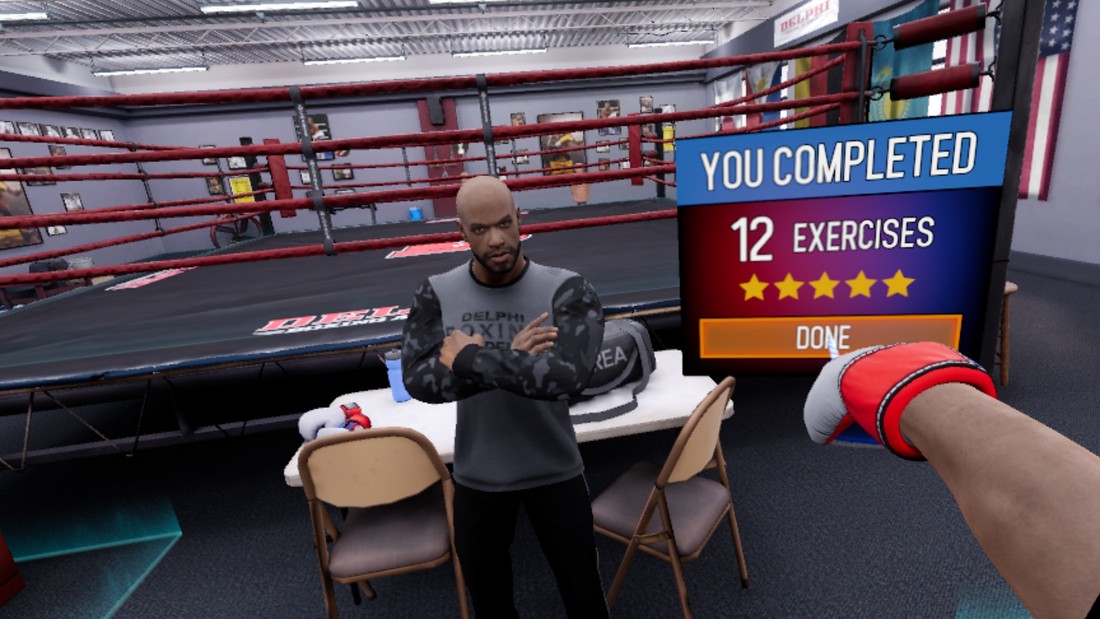 Once players are finally in the ring, there is a brief introduction like a normal fight would have, and after touching gloves, the fight begins. Just like a real boxing match, the goal is to end the match, whether it be by surviving all of the rounds, or knocking the opponent out. To do this, you can block, dodge, and of course, punch your opponent. The damage you do to your opponent depends on where you hit them, how hard you hit them, and damage is also increased if you land a combination of punches on the opponent. Whenever you throw a punch with any give hand, that hand’s stamina will deplete, and if you throw too often, your punches will be slow and ineffective. To recharge stamina, all the player has to do is return that hand to a guard stance, and the stamina bar, represented on the gloves, will regenerate over time.

Knocking opponents down results in a typical 10 second count, and in that time, the fighter must get back up or else they are considered knocked out, and then they are declared the loser. Normally, the action will not continue until the count has reached 8, regardless if the fighter is standing or not. In-game, the match continues almost the instant a fighter gets back up. In addition, there is very little time in between rounds to either catch your breath or digest the fact that the round is over, and the next round begins almost immediately. This was most likely done to not break the pacing of the gameplay, but in the end, it felt a little too sudden and a little too quick that the gameplay’s pacing was more affected than if there was a longer pause. Regardless, though, there is non-stop action to be had whilst in the middle of a bout.

​You get instant feedback with your punches, you react naturally to the punches, and dodging punches, while not the easiest thing or consistent thing, have a great risk/reward system to them. While blocking is a much more consistent and easier way to avoid damage, dodging punches puts the game into slow motion, and the game enters into a slow-mo state, allowing Creed to unleash a powerful flurry of punches. 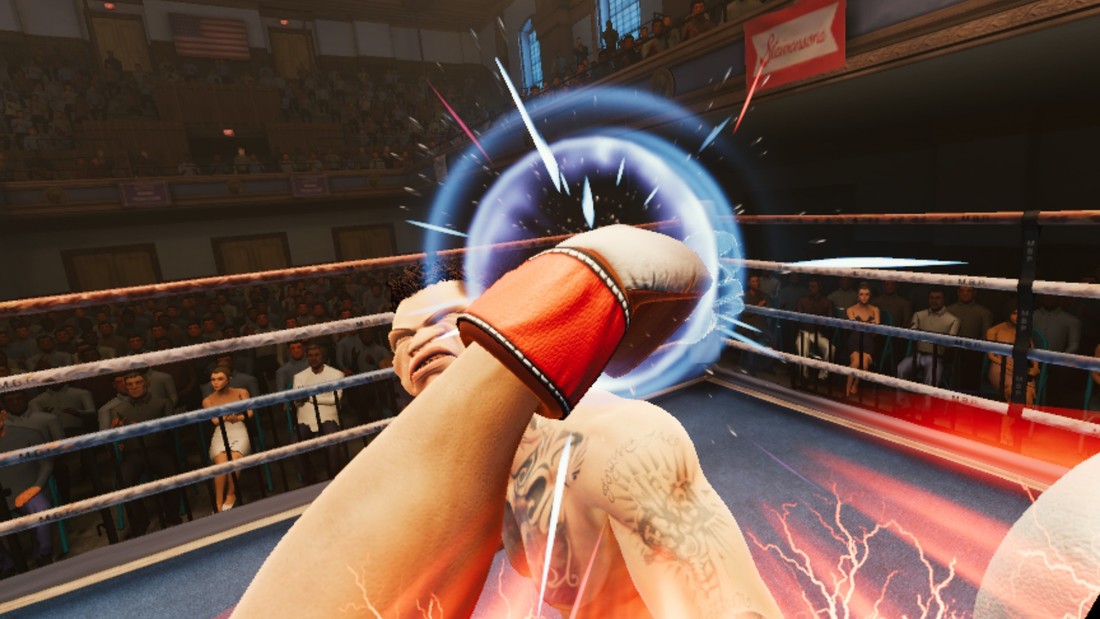 When you get hit with a punch that dazes you, the camera snaps away from first person to third person, almost as if the player got hit so hard that they feel like they got hit out of their body. While in this state, the player needs to match up their controllers with Creed’s gloves in order to “re-enter” their body. Also, when you get knocked down, you are also hit out of your body, but you also have to run down a dark tunnel to re-enter your body. Both of these elements mixed in create the feeling of being in a Rocky movie, or in this case, a Creed movie.

While a fun experience overall, there is also one neat and important feature added: the training mode. In this mode, you can freely walk around your gym and participate in multiple training exercises. This is an amazing tool to help people exercise on its own, and there are a plethora of options to choose from. While they will not turn the player into a boxing-ready fighter, it will help keep them in shape while also teaching some of the fundamentals of boxing.

Game Design:
There is a lot of attention to detail in Creed: Rise to Glory. From the training mini games, to the way the fighting feels, and even down to opponent fighting styles, there is a lot of love and boxing knowledge put into this title.

One of the coolest things added into this game are the various fighting styles from around the world. When fighting in Mexico, you fight against a stereotypical Mexican style. When in Philadelphia, you fight against someone who does the Philly Shell, a defensive style of fighting that originated from Philadelphia, and when you fight someone from the United Kingdom, they aggressively come forward. Little touches from the boxing world breathe life into the game.

There is an okay sized roster of fighters to pick from, and they all have their own unique fighting style, stats, and appearance. There was a good amount of character design that went into each fighter, and there is still room for there to be more fighters added. More content is still being added to the title, such as the upcoming Viktor Drago and Danny "Stuntman" Wheeler characters, so there is still hope for more content and improvement in the future. 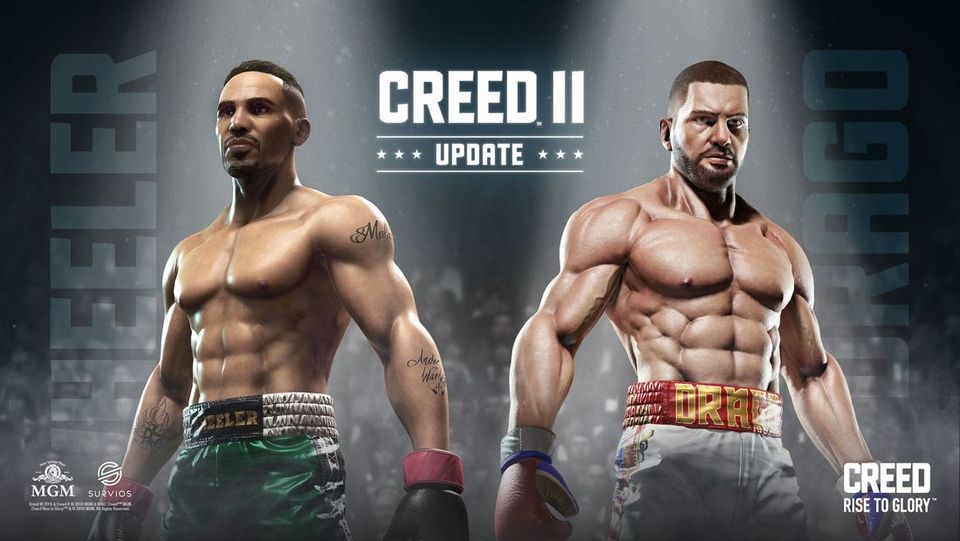 The boxing elements themselves are fairly simplistic, and aren’t complex enough that someone new to boxing will be lost. The training exercises are fairly comprehensive, and they honestly do teach an okay amount of boxing fundamentals. Some of the training games are better than others, however, and the physics for some are a bit off.

The graphics themselves try to take on a more cartoony approach, but there is still a sense of realism style to the game. It is just enough where the graphics are passable and do not reach uncanny valley. Some of the models, however, look noticeably worse, and some of the textures even are not the prettiest to look at. Most of the important scenes, however, are serviceable enough.

In addition, the music in Creed: Rise to Glory has a great amount of Rocky fanfare to it. The iconic Gonna Fly Now is present in the title, and an accompanying soundtrack fits right in to the Rocky universe. The musical cues could be better, however, as the fanfare could have been taken to the next level with a couple of the boxing scenes.

While some VR titles might induce motion sickness from looking around, Creed: Rise to Glory has you moving around constantly while focused on a target. Because of this, motion sickness is not really something to worry about. In addition, the game is a real workout, and due to the inevitable exhaustion players will get from playing, that feeling will most likely override any feeling of motion sickness. Intentional or not, VR titles need to experiment and explore game mechanics and elements that will help players overcome motion sickness that plagues a lot of VR players. 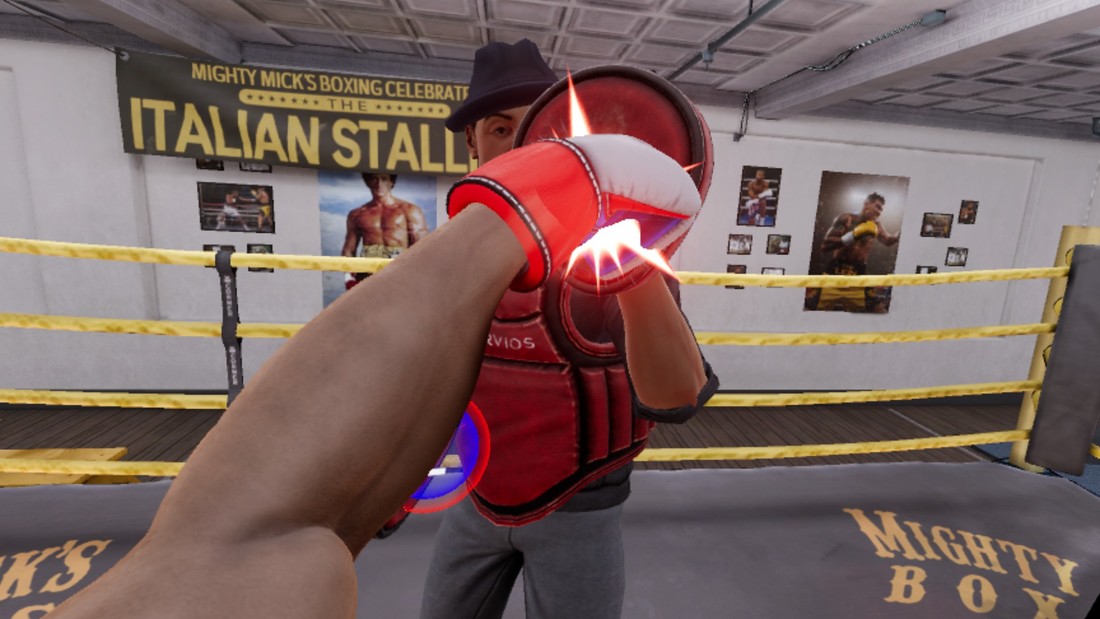 Story:
As with any great boxer, there is always a story behind a super fighter. This game is no exception. The story has the player following in Adonis Creed’s footsteps as he fights local nobodies to fighting for a world title. Before each fight, you will be able to walk around your gym and listen to a podcast that details the results of your previous fight. It is a nice touch to keep the player engaged with the game, and can also help give little bits of story before each upcoming fight as well. Fighters will also be able to listen to bits of dialogue from their trainer, and they are fed information that way as well.

Towards the end of the game, there is a massive buildup to a superfight with an undefeated opponent, and the game tries its hardest to hype the player up for an unforgettable fighting experience. Before starting a rigorous training montage, you get to hear in a podcast just how tough the opponent is: a perfect boxing record, has never been knocked down, and no one has taken him to 12 rounds.

When you do finally do fight this opponent, everything that you have learned in training comes together, and it strings together an extremely difficult and strenuous experience that is unforgettable. The exhaustion the player feels from the fight translates well into how Creed feels during the fight, and the masterful blend of these feelings pays off well once the fight is over. 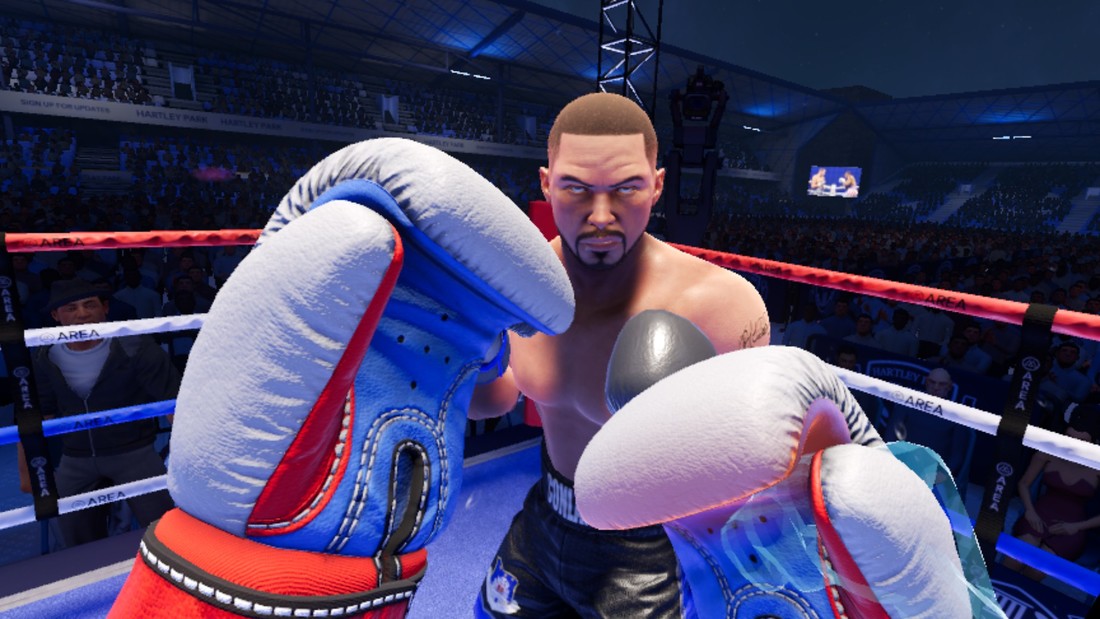 While it is and immersive and interesting experience, the story of Creed is fairly short, and can be completed in an entire afternoon or a little more depending on the ability of the player and the difficulty of the game. Despite this, the story is mostly predictable, does not offer any sort of customization or true progression for the player, and has very little incentive to play again outside of a desire to fight harder enemies or completing all of the achievements. There is, however, a bit of humor sprinkled throughout the story mode.

Multiplayer:
In terms of multiplayer, Creed: Rise to Glory has an online PvP option. Unfortunately, there are currently not a lot of players active to truly enjoy the online multiplayer, and there is no way to do local play for most practical setups. Survios, however, has partially circumvented this issue with their Survios VR arcades (establishments that bring VR setups to gamers with hourly rates instead of a costly VR setup). At these arcades, there are opportunities to not only play Creed: Rise to Glory, but to also play against someone right across from you.

In multiplayer, you can still select the standard roster of fighters, and once you load in, the fight commences and plays out as it normally would sans a computer opponent. It is truly an interesting experience to not only have both skill and knowledge of the game tested against another human player, but to also have endurance tested. 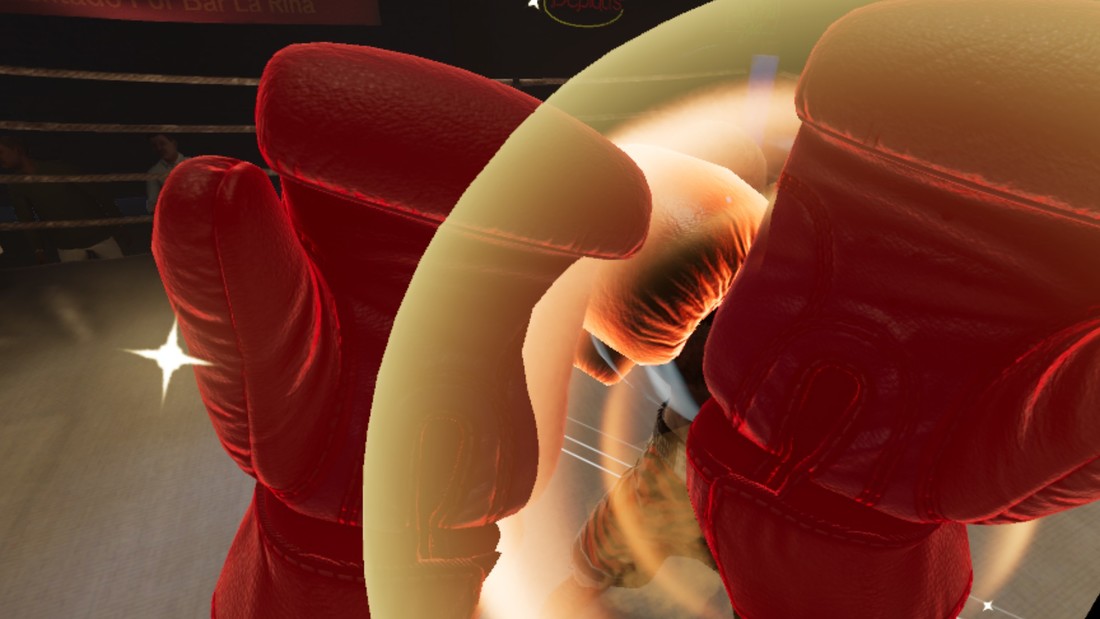 Verdict:
Creed: Rise to Glory is an immersive, thoughtful boxing experience like no other. While there is not a whole lot to offer outside of the core concept of a boxing game, the story mode offers a cool experience even though it is short and fairly non-replayable. The game makes players use light boxing techniques and conditioning to win, and really does add an awesome level of immersion to a boxing game.