GAME JOURNALIST & SCREENWRITER
Overview:
Legrand Legacy is a loveletter to JRPGs old, aiming to represent earlier entries into other series’ such as Final Fantasy, Legend of Dragoon, and Dragon Quest. The game is about Finn, a slave, who is emancipated, and vows to save his liberator’s sick daughter. Along the way, he is lead to a prophecy, and joins the group called Fatebounds to bring peace to his world before it tears itself apart. Along the way, Finn will battle enemies, travel across Legrand, and find out about his past that brings together an ambitious experience.

Gameplay:
The gameplay in Legrand Legacy is somewhat interesting, offering slightly in-depth combat, tactics, towns, characters, and exploration. The main gameplay is heavily similar to Final Fantasy VII in that you control the main character, Finn, and you walk around an overworld, traveling from location to location and fighting enemies occasionally.These enemies take the form of balls of shadow, and act similar to those of the persona series. If you run into these balls, you will enter into combat, and if you run into them while they are turned around, or vice versa, combat will begin with an advantage for whoever ran into the other from behind.
In combat, there are standard attacks, items, grimoires (spells), misc moves, and special moves that can be performed. Each player and enemy has a set type of static attack (slash, impact, pierce), certain elemental attacks (fire, water, earth, lightning) and enemies have strengths and weaknesses according to their types. Each playable character also has a special attack that charges up when you perform attacks, and can be unleashed for a satisfying, devastating blow. 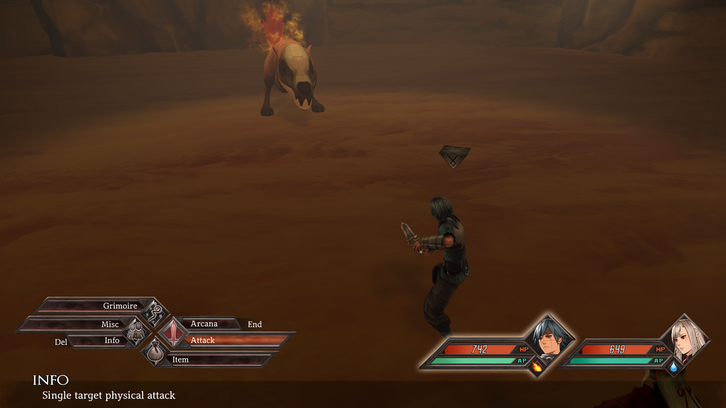 ​Combat mixes in some tactics and the ability to move characters around in a front row of three spots, and a back row of three spots. Melee characters can only use melee attacks if they are in front, and if an opponent is in the front row as well. Ranged characters can hit anyone from anywhere, and grimoires can be used by anyone against everyone. When battling, there is a sort of queueing system, where characters that have chosen their Melee/Ranged attacks will go first, and those that use their grimoires go second. When attacked while using a grimoire, there is a chance you will be interrupted, and your spell will not go through. This adds a bit more depth to the combat, as you have to plan out your attacks and positioning depending on a fight.
All attacks, guards, etc. are determined by a quick time event; when prompted, you have to press a button at the right time to successfully perform the attack, or land in a sweet spot to gain a bonus to the attack. While it is a nice feature to have in order to put more excitement and control into the battle, it does get a little monotonous after a while, and more variety in attack executions would have helped it break away from that.
Once you slay enough enemies, you level up, and can distribute two skill points across 5 skills, and once certain skill levels are met, you can unlock new grimoires to use. It was a fun and great way to unlock new spells, and it felt like your characters were actually progressing through their journey.
There are some weird difficulty spikes, namely with the second area, where some enemies can one or two shot the entire party. It felt a little weird that a standard enemy was harder to fight than a boss, so there are very small instances of balancing issues, but once you get your bearings, there is an appropriate challenge. 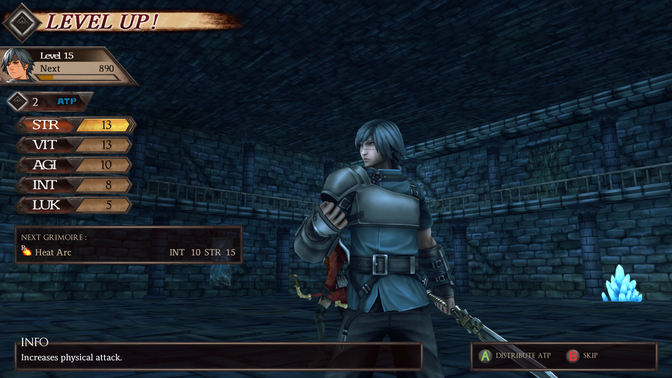 Game Design:
One of the first things you notice when playing Legrand Legacy is its graphics. The character models and animated cutscenes aren’t exactly the most up-to-date things on the market at the moment, even in terms of indie games. That being said, it is admirable and commendable that there are even animated cutscenes in an indie game.
The backgrounds, foregrounds, character portraits, and item portraits are all beautifully drawn, and this starkly contrasts with the game’s models and talking heads. That being said, the models in game, both with enemies and characters, make up for it with interesting character design. Although not all character designs are quite up to par, most felt interesting and had enough to offer that stopping for a moment and really appreciating the time that went into creating the model did not feel wasted. The music is also superb, and there are many notable tracks that really add to the world's atmosphere. 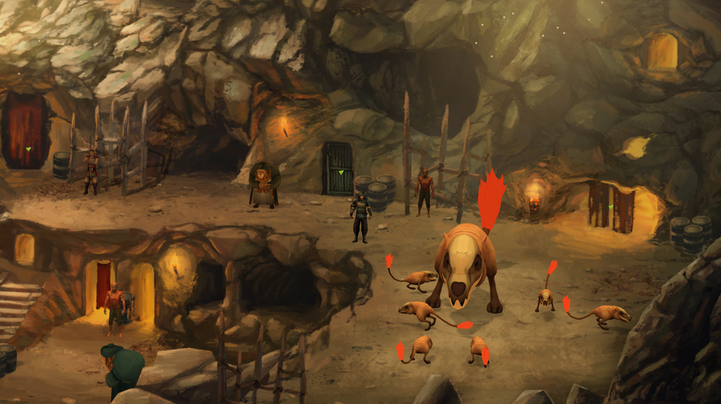 ​While the landscapes are pretty to look at, traveling around can feel clunky at times. While it tries to move like Final Fantasy VII, it fails to replicate the fluid movement that FFVII had to offer. Often times, getting stuck on a wall or obstacle is unexpected, and the directional movement does not match up with how the camera is situated. In addition, sometimes the camera placement in areas can be frustrating, with objects blocking the view of play, or having some obstacles or paths be unclear.
The UI works most of the time, and same with controller support. Everything flows nicely with the UI, and things are mostly organized and presented smoothly. The dialogue boxes are not properly optimized, so the text will stretch and shrink in the middle of text being displayed a lot of the time, but it is an issue easily overlooked, and I am sure it is an easy fix as well. I had minor issues with the controller, where my analog sticks would not register, but after a restart, everything worked again. Other than that, controller works about 95% of the time. There are some shops, namely crafting shops, where the analog stick will only work when it feels like it. The D-pad still works for these instances, but it was a minor annoyance for it to not work for no discernable reason.

Story:
Legrand Legacy’s story is a typical story of prophecies and chosen ones. It does not stray much from a standard hero story, and as a result, it is extremely cliche at times. That being said, some characters have decent character development, and the writing can shine at times. Humor and the characters really carry the story along more than the actual meat of the story. The major problem arises with the main character, who almost feels sidelined for most of the story. Although he is the main character, the most interesting and complex developments happen outside of his character, and as a result, he feels unimportant and unrelatable. Later on, Finn starts to become more relevant as he regains his memories, but it would have been neat to see him have more agency before this point. 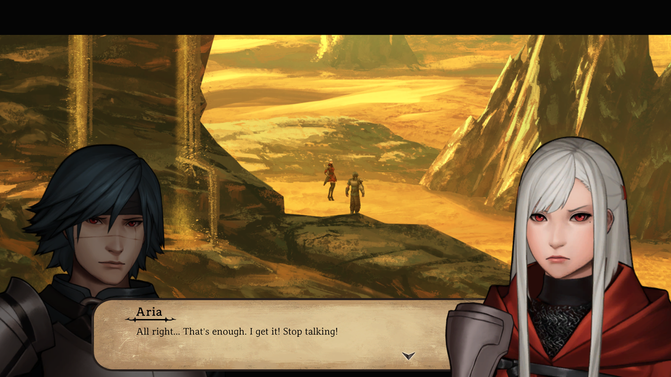 ​Verdict:
Overall, Legrand Legacy: Tales of Fatebound is an enjoyable experience to hardcore fans of the classic JRPG series. It offers enough that it is worth checking out, but it might be a turn off to newcomers, or those that are accustomed to modern JRPGs. While there are technical issues, a bland story, and oddities here and there, the gameplay is fun, and there is a decent challenge that awaits those who journey into the realm of Legrand.